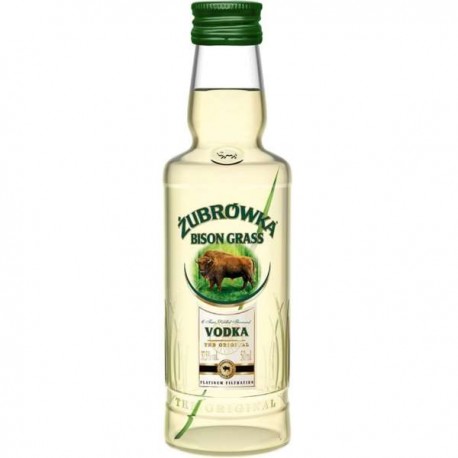 Bottles and miniatures of ZUBROWKA vodka at the best price!

WHAT IS ZUBROWKA VODKA?

Żubrówka, known in some countries as Bison Grass Vodka, is a type of vodka flavored with herbs, of Polish origin, distilled from rye and with an alcohol content of 40%.

The word Żubrówka literally means in Polish The vodka of the bison herb (żubr or zubr means bison in the Slavic languages), since the ingredient that characterizes the flavor of Żubrówka is the Hierochloe odorata, commonly called the bison grass. This herb grows in the Białowieża Forest, which is located on the border between Poland and Belarus, and is usually the usual pasture of the European bison.

HOW IS ZUBROWKA VODKA TAKEN?

Inside each genuine bottle of Żubrowka you can find a leaf of bison grass; this is the reason why vodka has its particular taste, aroma and yellowish color. The most common way to take Żubrówka is very cold and accompanied with apple juice, which is known in Polish as tatanka or szarlotka.