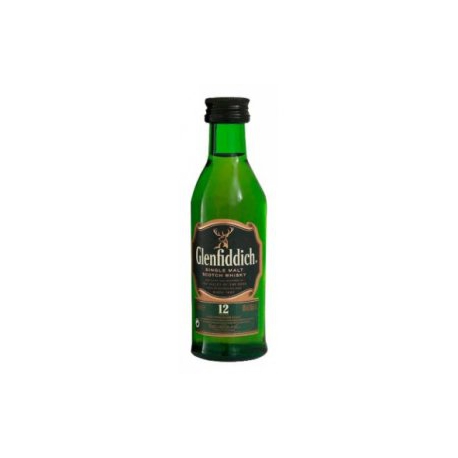 Bottles and miniatures of whiskey GLENFIDDICH 12 years at the best price.

Glenfiddich (Valley of the Deer in Gaelic) is a malt Scotch whisky distillery located in Dufftown, Scotland, in the Speyside region. It belongs to William Grant & Sons.

The GLENFIDDICH distillery was founded in 1886 by William Grant in Dufftown, Scotland, in the valley of the River Robbie Dhu. The first drop of Glendfiddich whiskey came out of the distillery stills on Christmas Day 1887.

After the difficult times of the 1960s and 1970s, many small independent distillers were bought or put out of business. To survive, William Grant & Sons expanded its beverage production, and introduced advertising campaigns, a visitor centre and from 1957 Scotch whisky bottled in its distinctive triangular-shaped bottles.

Later, William Grant & Sons was one of the first companies to package its bottles in tubes and gift cans. She was also one of the first to recognize the importance of duty-free shopping for spirits. This marketing strategy was a success, and GLENFIDDICH has become the best-selling single malt in the world. It is sold in 180 countries, accounting for 35% of global single malt sales.