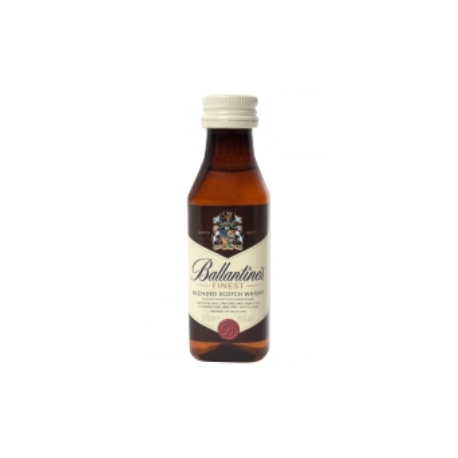 Bottles and miniatures of Ballantines Scotch whisky at the best price.

Rating
3
George Ballantine's was born into a family of farmers from the town of Brought Knowe, Peebleshire. These were difficult times in which despite the hunger he suffered, he was motivated to gain knowledge and a great education. At just 19 years old, George opened a shop located in an area of Edinburgh completely different from the others. He liked to do things his way.  Every couple of years he moved his store around getting closer and closer to his customers and making  sure he was at the center of it all. He never wanted the more knowledgeable to miss out on his smooth mix. He went his own way, motivated by the desire to create the ultimate whisky without ever compromising on quality.
George's persistence led him to always be innovative. To make people aware of this wonderful whiskey, he began advertising his train delivery service throughout the country. BALLANTINE'S came from side to side, expanded and grew corresponding to the desire for a whisky made with elegance. With 2,000 gallons of vintage whiskies, special attention to detail and a relentless rejection of mistakes, George became a trusted supplier. As our founder and first Master Mezcaldor always said, authenticity and excellence will always be on your side.
With the passage of time came George's first son, Archibald. His dream of founding "George Ballantine & Son" came true with a first store in Edinburgh and then another in Glasgow. Archibald had a certain charm and good luck. The 2,000 gallons soon multiplied by more than 20,000 gallons of BALLANTINE'S masterfully mixed and that's how the negotiation prospered.
By 1891, as George approached his final years, he entrusted his children with the future of both whiskey and the name BALLANTINE'S. Staying true to Geroge's will and determination, his sons continued that drive for perfection in whisky, which was posthumously awarded a Royal Order by Queen Victoria. In 1910, in honor of George and his passion, his sons created the whisky for which he is most remembered, BALLANTINE'S Finest - complex, elegant and truly iconic.  The years continued to pass and BALLANTINE'S remained faithful to George's harmony of perfection. Finest, with the union of two special mixtures, a  decisive 17 years and as it could only be described, a legendary 30 years. Then came the excellent 60's, in which we celebrated with a new and young whiskey 12 years, characterized by cheerful notes of orange and honey. The 40-year-old blend we drink today was brought into barrels at that time – or even earlier – creating a complex flavor that comes from these enviable whiskey reserves. Reaching the 90's, marking George's rite of passage and great ambition, BALLANTINE'S launched a 21-year-old blend, a refined whisky that completed the range of BALLANTINE'S.
It is now in the 2000s that the new torchbearer of ambition for perfection has been chosen – Sandy Hyslop has teamed up with BALLANTINE'S to create the whiskies from now on. He is named the fifth master mixer in 180 years of history, testament to his skills and commitment to creating the perfect blend. Today we continue to honor the traditions established by George Ballantine and celebrate it with "Limited", our most exceptional and exclusive blend made with the most valuable malts and grains of BALLANTINE'S. Finally, in 2011, Jim Murray gave BALLANTINE'S and George's memory the greatest honor by naming BALLANTINE'S 17 as the World's Whisky of the Year.
George Ballantine's, our founder, used to say to his children - "Get the right mix and you'll have achieved everything right."
Since then, we have stayed true to this phrase.