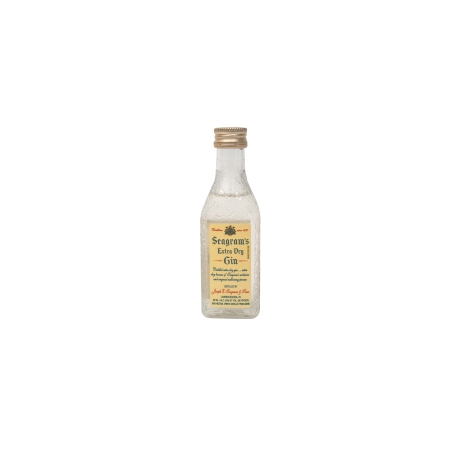 Bottles and miniatures of Seagrams Dry Gin at the best price.

Discover the recipe for how to prepare a Seagrams gin and tonic in our section "Blog MINIBOXBAR".

Seagram's Gin's history dates back to 1857 when the distillery was founded in Waterloo, Canada. In 1869, Joseph E. Seagram's became a partner and later 100% owner of the business.

In 1929 the distillery was purchased by the Distillers Corporation Limited which maintained and assumed for the distillery the name of Seagram's Gin.

The classic bottle (since 1939) has irregular shapes on its sides which gave it the nickname of the soft bottle gin with potholes. The bottle of SEAGRAM'S Gin was originally designed inlaid with seashells to give it an embossed texture.

The shield of the Seagram family presides over the front of the bottle.

The intensity of juniper and its herbaceous character together with soft citrus and balsamic notes are the sensations that distill the ingredients of SEAGRAM'S gin.

Are you looking for another bottle format? For example, 70cl bottle?

We attach below a link where to buy it.