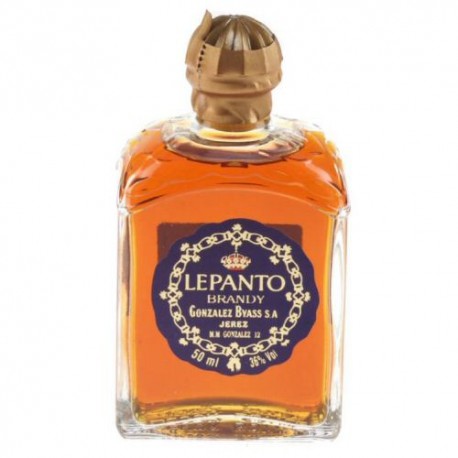 Bottles and miniatures of Lepanto brandy.

WHAT IS LEPANTO BRANDY? HOW IS IT MADE?

BRANDY LEPANTO is made with fine Palomino grapes from the vineyards of González Byass and is distilled in stills of the winery itself. Lepanto's Holandas age in previously vinified American oak boots for more than 12 years with TIO PEPE (Sherry Cask), who follow the traditional system of criaderas and solera.

HOW TO TAKE LEPANTO BRANDY?

Brandy is once again a trend among the most educated and demanding palates. Thus, The Brandy Lepanto, in addition to being taken in cocktails, can also be enjoyed a combination of brandy with cola, orange, tonic or ginger ale (soft drinks with which it combines perfectly according to the Regulatory Council of Brandy of Jerez) or a glass of Lepanto alone or with ice. This is the best way to appreciate the complexity of Lepanto, the only Gran Reserva Brandy made entirely in Jerez, which follows the traditional system of criaderas and solera, aging for 12 years in American oak boots that have contained Fino wine, giving it a much more elegant and pleasant taste to the palate.