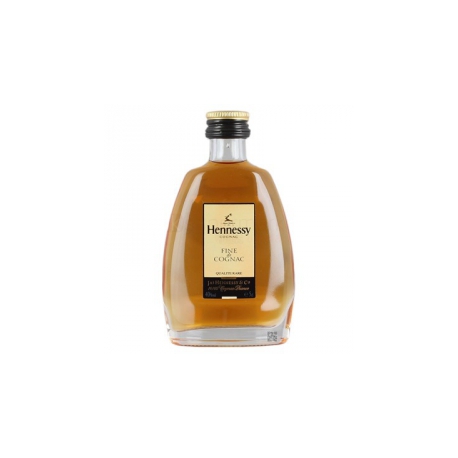 Bottles and miniatures of cognac HENNESSY at the best price.

HENNESSY is one of the oldest and most famous manufacturers of cognac.

The company was founded when the Irishman Richard HENNESSY, who had been a mercenary for King Louis XV, was compensated with land in the village of Cognac in France in 1765. 1 Richard set up a commercial business, initially sending liquor to his friends and relatives in Ireland. His son, James HENNESSY, expanded the business to include cognac production. They renamed the James (or Jacques) business HENNESSY & Co., the name the company retains today. Successive generations of HENNESSY have run the company (it is now the eighth generation). However the property has changed over the years. In 1971 HENNESSY merged with Moët & Chandon. So in 1987 the beverage group merged with haute couture firm Louis Vuitton to create what is now the world's largest luxury goods business: LVMH.

HENNESSY currently sells about three million boxes of cognac each year. Recent innovations include the attempt to broaden the appeal of the drink beyond its traditional consumption. For example, the company has introduced new products, such as "Pure White" and "Fine de Cognac". Also, new cocktail recipes have been introduced to the market, such as the combination of HENNESSY with the Red Bull energy drink to form "Crunk juice", a cocktail popularized by musical artists such as Lil Jon and Ying Yang Twins.