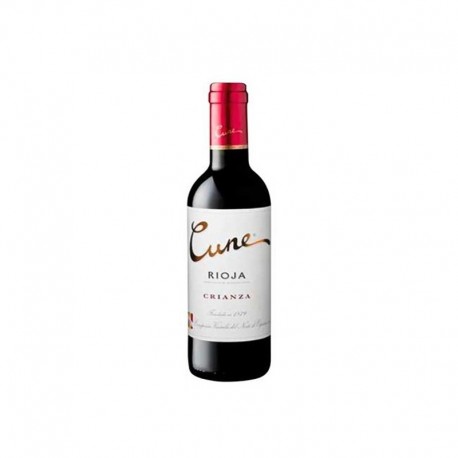 Pairing: Ideal for any type of Mediterranean diet food.

The first wine that was produced in the Haro Winery of the Northern Spanish Wine Company was bottled with the Cvne brand and made in the style of the Bordeaux Medoc claret. The Cvne evolved into the current Cune Crianza, formerly called Third Year.

Cune Crianza 2018 has its origin in vineyards of different places with diversity of soils, orientations and ages located in the Rioja Alta and close to CVNE, a location that favors the arrival of the grapes to the winery quickly and in the best conditions for the elaboration. After fermentation of the harvested fruits at a controlled temperature, in order to preserve the fruit expression that characterizes this Aging, a vatting of approximately twelve days is carried out and malolactic fermentation begins in stainless steel tanks. Subsequently, the wine obtained is aged for twelve months in American oak barrels, where it will acquire its precious bouquet.

In 1884 the brothers Real de Asúa and Isidro Corcuera decided to build a large winery in the neighborhood of La Estación de Haro (La Rioja). Thus is born a set of beautiful buildings within the industrial architectural line of the nineteenth century, with aging warehouses made with masonry stone, adobe brick, oak posts and poplar beams. At that time Haro was the capital of Riojan wine and Cvne one of the first firms to establish itself in this famous wine enclave.

Currently, Cvne has become a world reference in the wine sector. Half of the grapes with which they make come from their own vineyards, and the rest are acquired through contracts with farmers of the best payments of the D.O.Ca. Rioja. From the vineyards of Rioja Alta arises the range of Imperial red wines (flagship of the winery since the 20s) and wines labeled under the Cune label. The Bodega de Haro is formed by a set of buildings dating from the nineteenth century and that are kept fully updated and equipped with the most modern production systems. Cune was one of the first wineries in La Rioja to bottle. In 1900 it already had an extraordinary aging capacity, 80,000 bottles, something unusual at a time when it was normal to dispatch the wine as soon as possible.

On the nose, the aromas of red fruits, strawberries, raspberries and currants predominate, all well integrated with the aromas of vanilla and toffee from their 12-month stay in barrels. Both the entry in the mouth and its passage through the palate is soft, fine and elegant, with a friendly tannin and a slight acidity that makes us have a fresh wine with long retronasal.